The A-League Melbourne derby has been abandoned after a player and the referee were injured by a spectator during a pitch invasion.

Fans ran on to the pitch in the 22nd minute of the match between between Melbourne City and Melbourne Victory.

Referee Alex King was trying to shield City goalkeeper Tom Glover when both suffered cuts to their faces after being hit by a metal bucket.

Glover had several stitches before being taken to hospital for scans.

A City statement saidexternal-link Glover, 24, went for “further follow up checks” after being assessed by the club doctor.

A TV cameraman was also injured by a flare.

In a statement,external-link Victory said the club was “devastated” and “unequivocally condemns” the “appalling behaviour” of fans at Saturday’s game at AAMI Park, which the two clubs share.

“The actions that occurred, that saw spectators enter the pitch and injure a Melbourne City FC player, an official and a Network 10 cameraman, are not acceptable under any circumstance and have no place in football,” it continued.

Supporters had been protesting before and during the game, which was initially suspended then abandoned on player safety grounds. 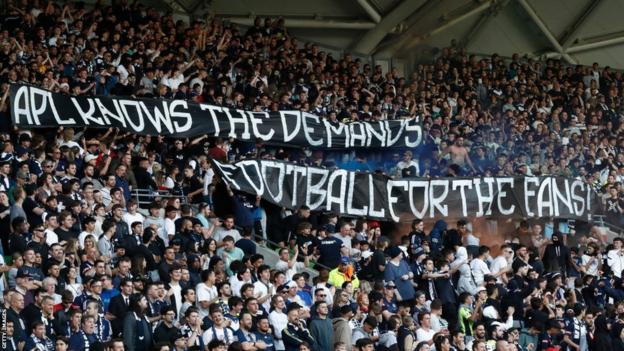 The Australian Professional Leagues (APL) announced last week that it had sold the A-League Grand Final rights to Sydney for the next three yearsexternal-link, and protests were planned at several A-League games this weekend as a result.

Fans of both Victory and City planned a walk-out on the 20-minute mark but the protest escalated after flares were thrown on to the pitch by both sets of supporters.

City were leading 1-0 when Glover appeared to throw a flare back towards the crowd, according to Melbourne newspaper The Age.external-link

Victoria Police said approximately 150-200 Victory fans then ran on to the pitch, and Glover and referee King were struck by a bucket used to dispose of flares, covering them both in powder and smoke.

The players, including former Portugal and Manchester United winger Nani, were immediately ushered from the field and Football Australia said the game was called off “to protect the integrity of the match”.

A Football Australia statement said “strong sanctions” would be handed down after the “shocking scenes”.

“Such behaviour has no place in Australian football, with a full Football Australia investigation to commence immediately,” it added.

An APL statement said: “The Australian Professional League is co-ordinating with Football Australia regarding the ramifications of these events.”

Victoria Police are also investigating the incident, which has been widely criticised on social media.

“I can’t believe what has happened,” said former Australia midfielder Robbie Slater. “Not the way to protest. Very sad that it has come to this.”

Former Australia goalkeeper Clint Bolton added that “I’ve never felt as embarrassed and as empty as I feel right now.”

“That is an absolute disgrace from the Melbourne Victory fans,” wrote Western United left-back Ben Garuccio.external-link

“Not what football in this country needs and I hope whoever threw that bucket is banned from ever attending another A-League match.”

Central Coast Mariners fans did the same during Saturday’s match against Sydney FC, while a group of Sydney FC fans boycotted the game in Gosford altogether. 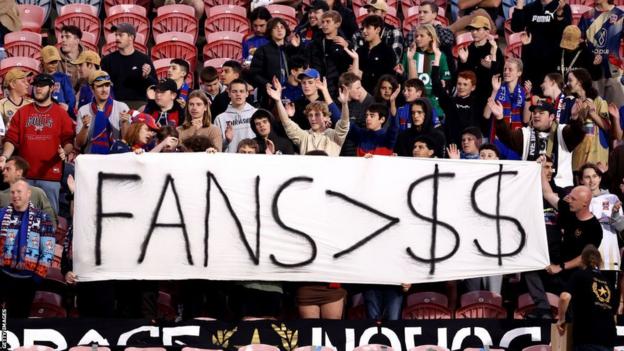 Newcastle Jets supporters also protested at their game on Friday