The PIP1510 Connect(opens in a new tab), sold for $169.99, is in the middle of the pack of Motorola’s connected video monitor offerings. After testing it for a few months in my son’s nursery, here’s what I think baby monitor shoppers should know about the Motorola PIP1510 Connect:

Right out of the box, I appreciated how small and unobtrusive the PIP1510 camera unit is. With the look of a tiny black and white robot — Motorola accurately describes PIP as “a friendly face” — it can be mounted to a wall or positioned on a flat surface such as a shelf or desk. We positioned ours near the corner of our baby’s crib, where it’s worked well ever since.

The camera also features two-way talk, infrared night vision, and remote panning, tilting, and zooming. In the early days, the zoom function got a ton of use, as I constantly checked for signs of life and health. Now, with a baby who doesn’t like to stay in one place for long, I’m constantly manipulating the camera from the parent unit to get a good view. 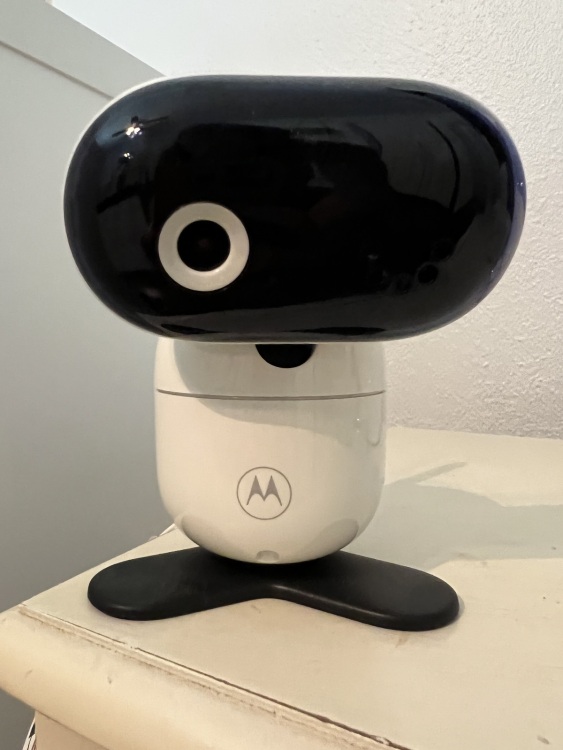 The Motorola PIP1510 has a cute design fit for a nursery.
Credit: Becky Wade Firth / Mashable

As its name suggests, the PIP1510 Connect is WiFi-enabled, meaning that you can stream the action from a smartphone in addition to the parent unit. You’ll need to add the camera to your home network and download Motorola’s companion app on your phone. The company says it authenticates requests to view the camera via the app.

Not all video baby monitors come with a parent unit. The PIP1510, fortunately for me, does. It’s wireless, too, and works within up to a 1,000-foot range of the camera. As my baby’s primary caretaker, I’m bustling around the house all day long, so it’s nice to be able to keep tabs on him without constantly opening up my phone to use the app. Places I regularly perch my parent unit: my desk while I’m writing, a bathroom shelf while I’m showering, a windowsill while I’m cooking, and the cupholder of my treadmill while I’m running.

In addition to messing with the camera view, from the parent unit I can monitor the room temperature, control the volume and brightness, and keep an eye on the noise in the nursery, thanks to an indicator bar that changes from green to yellow to red according to noise escalations like squawking or crying. I can also set a timer so the screen stays on for five, 30, or 60 minutes, and press a button to communicate with people in the nursery.

Another perk of the parent unit is the ability to play lullabies and audiobooks in the nursery from the menu bar. (If you can soothe your baby that way, consider me impressed.)

The parent unit isn’t without a few flaws. First of all, for as discreet as the camera is, the portable monitor is pretty clunky. The screen is about four-and-one-third inches (though advertised as five inches), but the unit as a whole is much wider, and quite thick, too. For the most part, its heft doesn’t bother me. But in a few situations — like my treadmill runs and treks up and down stairs — it would be nice if the unit were sleeker.

The display is also a little lacking. It’s an LCD color display, but the picture feels laggy and grainy compared to other monitors I’ve tried. Again, I don’t need state-of-the-art here, and what the PIP1510 offers is perfectly adequate. But if you’re looking for the highest quality video possible, you’ll want to keep hunting.

My final critique regarding the parent unit is that its seven hours of battery life is woefully insufficient for a monitor that may get nearly 24/7 use. If you plan on using it overnight, you will definitely want to keep it plugged in. The few times I left the monitor on and drained the battery (which usually happens at night) resulted in some incessant beeping that stopped only when I got out of bed and plugged it in. Parents of infants have enough nighttime interruptions as it is; we don’t need any more from a baby monitor.

Because I use the parent unit so much, I rarely open up the Motorola Nursery app. But if you dislike carrying around a monitor, or you want to watch your baby while away from home or WiFi, the app will come in handy. It’s simply designed, with a livestream of the crib at the top and a few extra features below it. The video actually looks sharper in the app than on the monitor — especially when you tap the arrow and make it full-screen.

In addition to 24-hour streaming, the app offers temperature detection, two-way audio, and real-time event monitoring. You have to know where to go for the latter, though: from the home page, click on devices, choose PIP1510 Connect, and then you’ll see a log that includes events such as “sound detection.”

The app includes a few less practical but potentially sweet features, too. You can use the camera to snap photos and videos, and share them with other people straight from the app. You can also track your baby’s development with a “journal,” which is simply a place where you can log feedings, diaper changes, and sleep. I personally wouldn’t take advantage of those features, but other parents very well might.

Is the Motorola PIP1510 Connect worth it?

Having used it in our nursery for a few months, and tried a few other monitors since, I consider the Motorola PIP1510 Connect(opens in a new tab) an average baby monitor. It’s compact and reliable, and it comes with a portable monitor that travels around the house with me all day long. Other standout features include the remote camera manipulation and WiFi connectivity, if you prefer using the Motorola Nursery app to the parent unit.

On a less positive note, the picture quality and battery life of the parent unit leave a lot to be desired. While neither of those are deal breakers, for $170, it’s worth shopping around to make sure the PIP1510 Connect is what you’re going for. If you end up choosing it, you may not be wowed, but you probably will not be disappointed, either.